Say "Movie" for me and win!

Raise your hand if you just read the title to this blog post and squealed a little. That excitement you just felt could happen for real. I need you all to be my fairy godmothers and help me make some Hollywood magic happen. All you have to do is say "movie" for me.

Now there's a way for fans to make their book-to-movie desires known. It's called the IF List. IfList is a website dedicated to telling Hollywood what stories we want made into movies and who we want to star as our favorite characters. I just read today that Colleen Hoover's Ugly Love is now in development thanks to her IfList campaign. (Congrats, Colleen!!! I'm so excited!) Well, guys, if she can do it, we can do it too! I get comments all the time about you guys wanting a Cinder & Ella movie, so lets make it happen!


10 Reasons why Hollywood should make
Cinder & Ella into a movie:

The Fault In Our Stars: Movie,  If I Stay: Movie, Cinder & Ella: ....???? It needs a movie!
7. Because Cinderella movies make lots of money!
Proof = Disney's Cinderella (And it's bazillion sequels) Not to mention merchandising!
Warner Bros' A Cinderella Story (And's its two sequels)
Fox's Ever After
And tons of other retellings that I'll let you look up on your own.
8. Because Fairy Tales are so in right now! ( Malificent, Snow White and the Huntsman, Ever After High, Once Upon A Time...even the upcoming Cinderella movie!)

9. Because YA Novel adaptations are so in right now! The Hunger Games, the Giver, If I Stay, The Perks of Being A Wallflower, The Fault In our Stars, the DUFF, Divergent, like ever Nicholas Sparks novel ever written...just to name a few. Seriously, like half the movies released in the last few years were YA adaptations. What's one more?
10. Because the fans want it, and they're about to say so!

Here's the part where you can win. :)
As an incentive to get this campaign started, I'm giving away 2 signed copies of Cinder & Ella, (International) with swag if you join the IfList and vote for Cinder & Ella. To enter the giveaway you have to create an IfList profile and become a Cinder & Ella supporter. (You can do this in 2 seconds by logging in with Facebook if you have it.)

Here's the link to the Cinder & Ella campaign on IfList: (click the picture.) 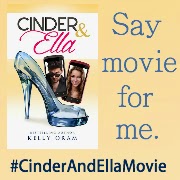 While you're there, be sure to add your suggestions for the cast! Have fun with it, be active, be vocal, tell your friends to get in on the fun. Lets make our own Cinderella story and get the book on screen! We can totally do it you guys! Also, bonus entries on the giveaway for "supporting" my other books listed on IfList. :)

Other ways you can say movie for me:

1. Buy the book
Nothing entices movie makers like sales numbers and rankings.

2. Tell your friends
Voices are louder when there are more of them. Make some noise and then encourage your friends to join the campaign. Like and Share the Cinder & Ella Movie Facebook Page, post comments, tweets, quotes from the book, pics of your dream cast... be loud!

3. Bug the major movie studios!
Tweet them, stalk them on Facebook, and #SayMovieForMe! Here's a list of some of the biggest movie studios just to get you started.  :D