Have you had bad luck with romance in the past? Now's your chance to get not just one, but THREE swoon-worthy guys to be your Valentine this year! Enter your dating horror story in the Battle of the Book Boyfriends Dating Horror Stories Contest and you could win the Kelly Oram Contemporary collection. (Signed paperbacks, contest is international)

In case you haven't heard yet, this February I will be working hard to help you find the perfect book boyfriend to be your Valentine!

As the leading guys from all of my books duke it out in a battle to be crowned King of the Book Boyfriends, all of you will have the chance to swoon, fall in love, and maybe even take some of these yummy guys home with you!Throughout the Battle there will be lots and lots of opportunity to win stuff! I'll be giving away lots of signed books, posters, bookmarks, "Virgin Val" charm necklaces, and more signed books!  AND RIGHT NOW IS YOUR FIRST CHANCE TO WIN!

Every day from Feb. 10th through Feb. 16th, I will personally introduce you to all of the Kelly Oram boys and they will be featured on different blogs across the blogosphere. There will also be a different chance to win every single day by participating in quizzes, contests, polls and more! And we'll end with a twitter party on the 16th where I'll announce the giveaway winners and crown the official King Of The Book Boyfriends! The King will win the opportunity to be the superstar for once. (Meaning I will write a collection of scenes or short stories from the King's POV.

Plus, Valentines weekend (Friday-Sunday Feb 14th-16th) All of my ebooks will be on sale for just $0.99 each! If you haven't had the chance to read them yet, now's your chance to get them cheap! Gotta love cheap books! (Especially if you're a readaholic like me and spend the majority of your paycheck on books.)

For more details about the Battle of the Book Boyfriends click the image below to get the full event schedule. 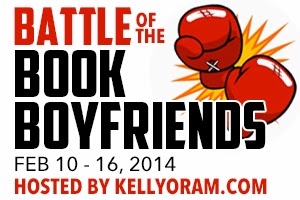 How to enter: It's simple. Have a dating horror story? Email it to me at [email protected] with the subject Dating Horror Story. Anyone who sends a story will receive some signed bookmarks just for entering, and then I'll select my favorite stories to be finalists. All finalist entries will be posted on my blog during the Battle of the Book Boyfriends. (Entrants will be kept anonymous, of course.) Then I'll put it up to the readers to vote for the best one. The winner will receive the a signed paperback collection of my contemporary works. (Serial Hottie, V is for Virgin, The Avery Shaw Experiment.)

Last day to enter is Thursday Feb. 13th. Finalists will be announced on Valentine's Day. Again, this contest is international. Have fun and good luck!  :)

The First Time Ryan Says, “I love you.” (Ryan POV)

"The Superkiss" from Ryan’s POV

"The Superkiss" from Ryan’s POV

This was actually posted on my blog forever ago. I'm just moving stuff around today. Ugh, I really should switch over to Wordpress because I hear you can do so much more with it, but I don't know how to use it. SO I stay here on blogger. One of these days I should just pay a web designer to make me a real website. Probably not going to happen any time soon.

Anyway, here's a scene from Being Jamie Baker that I wrote from Ryans point of view. There will be one or two posted after this...

"Working Out" from Ryan's POV

My date with Jamie was amazing, but it was so G rated that I’d been a flustered mess all week. How I managed to get through that night without laying a single finger on her was nothing short of a miracle. There was no way I’d be able to do it again. I didn’t want to.

I was ready to push Jamie in a more physical direction so I suggested we work out together. At the time I thought it was brilliant because I could still use the pretense of practice, but we’d both be wearing less and our adrenaline would be up.

I hadn’t had the chance to take my shirt off for Jamie yet. Not that I’m as ripped as Ryan Reynolds exactly, but I’m not dumb. Girls act differently around me when I’m at the pool or out on the lake. It’s like I turn them primal. I wanted to turn Jamie primal.

There was definitely an overabundance of hormones present this afternoon, but they were all mine. Jamie is beyond hot even on her bad days, and I knew she’d look good working up a sweat. Still, I was not prepared for the sheer sexiness that is Jamie Baker working out.

Jamie is always put together. Her hair and makeup are always perfect. Her clothes are always stylish. She’s gorgeous. But when I’d picked her up this morning and found her makeup-less with her hair thrown up in a simple ponytail, wearing nothing but a sport-tank and tiny workout shorts, gorgeous wasn’t the right word to describe her. She looked so freaking hot I nearly had an aneurysm and she hadn’t even started her workout yet.

When we finally got to the exercising, I couldn’t focus on anything but the fact that in order for Jamie to actually put some strain on her muscles she had to bench my truck. Seriously. My F250. Nearly 6,000 lbs of machine and she just lifted it above her head over and over again. It was the most amazing thing I’ve ever seen.

Then she started breaking a sweat. Needless to say I forgot about her superpowers. The only thing I could think about was getting all worked up and sweaty with her. Feeling the hardness of her muscles beneath all that soft skin. Tasting salty kisses. Feeling heat rising between our bodies, our breaths coming fast…

“You know? I think you were right. Making you work out was a really bad idea.”

“Aside from the fact that the F-250 you’re pumping is making me feel extremely inadequate, I’m afraid that if you don’t stop doing that, you’re going to end up throwing it at me.”

Jamie looked at the vehicle above her. “Why would I throw a truck at you?

More images flashed through my mind. Definitely not G rated. “Because you usually get cranky when I try to kiss you, and if you don’t stop looking so downright sexy, I’m going to have to do just that.” And then some…

Jamie took a slow concentrated breath and the truck rose again. The muscles in her stomach tightened. A drop of sweat that had pooled in her naval rolled down the side of her ribs.

I took a much needed deep breath. Baseball… Frogs… Snowstorms… My grandma…

“I’ve never seen you break a sweat before. It’s got my mind in the gutter big-time.”

“Quit objectifying me right now, or I will throw this truck at you!”

“Go take a cold shower or something while I finish.”

“Oh yeah, that’s a brilliant idea. Why don’t you just take a soak with a blow dryer?”

Geez. She may have had a point there, but there was no need to be so hostile. I hoped it was because she was just as frustrated as me. I doubted it though. I’d been drooling over her for the last half an hour and she’d been so focused it was like I wasn’t even there.

I abandoned my weight bench for the patio swing and closed my eyes as I chugged a bottle of water.

I had to get myself under control or I was going to get really cranky. That couldn’t happen. I couldn’t let the Ice Queen get to me. Ever. That was the one thing I had over everyone else. Jamie could push people away in her sleep, but no matter how hard she tried she was not going to scare me off.

Jamie’s voice startled me out of my brooding. “Do you hear that?”

“A really quiet humming noise. I can’t exactly place it, but I’ve never heard it out here before.”

I listened, but all I heard was nature. “It’s probably just a boat down on the lake.”

Jamie abandoned her workout. I couldn’t tell if I was disappointed by that or relieved.

She climbed out from under my truck and pointed toward the forest. “The lake is behind the house—this noise was coming from out there.” She scanned the trees and then frowned. “Maybe my mind is just playing tricks on me. I tend to get a little paranoid when I’m doing things like lifting trucks out in the open.”

I sighed. Here I was stuck in the hottest fantasies about her and she was just worried that someone was watching her. So much for things getting physical between us. The only person I’d managed to turn primal today was me. Lame.

I sat up, disappointed, but then Jamie came to sit next to me on the swing. I took a chance and put my arm around her. I could have done a happy dance when she didn’t shrug me off. It was enough to perk my mood back up.

“All right then,” I said, feeling like my patience had been renewed. Is it sad that one arm over her shoulder felt like a magnanimous victory? “Why don’t we work on something a little more subtle if you’re worried? How about your hearing? I’ll start singing, and you go for a jog. Call me when you can’t hear me anymore. That’s not so obvious as bench-pressing my truck.”

I gave her a light squeeze—totally just friendly—but for some reason it was the absolute wrong move. “I don’t feel like practicing anymore today,” she said sadly.

I didn’t get it. What had I done now? I swear sometimes it’s like Jamie’s bi-polar. I never have a clue what’s running through her head. I wonder if crazy mood swings are considered a superpower.

Seeing Jamie upset kills me. I can’t even begin to imagine what it’s like to be her. She’s been through so much, and I know she feels like she’s alone in this but she’s wrong. She might be the only one with superpowers, but I was there now, and I was going to get through this with her. Whether she wanted me to or not.

“All right,” I said, forcing cheer into my voice that I didn’t feel.

I wanted nothing more than to pull her into my arms and make her tell me what was wrong so that I could help her feel better. But the more I push her the more she closes off from me, so, as impossible as felt, all I could do was be patient and wait for her to let me in.

“It’s lunch time anyway,” I said, “and I’ve officially worked up an appetite.”

Jamie jumped on that idea, happy to avoid telling me what was up. “You like New York-style pizza?” she asked.

She had my attention now. If I wasn’t going to get a hot makeout session, pizza was better than nothing. “I’m a guy. I love all forms of pizza.”

“Well I happen to know where to find the best pizza in the country, so why don’t you point me in the direction of a bathroom, and once I’m all cleaned up I’ll run get us lunch.”

Now that would just be a shame. “Aw come on Baker, I’m digging that post-workout look.”

“More like post-workout stink,” she said. “Don’t forget I have a heightened sense of smell.”